Play "Give and Take" with your Group! 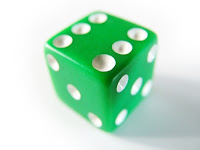 We have a favourite , fun game which we play at the Day Centre called Give and Take...
You Will Need (for two groups of 4 players)
An old pack of playing cards (does not matter if incomplete) As you will be writing on these cards, with your marker pen, only use cards you won't need to use again!
A black marker pen
2 dice
Plastic cup - dice shaker
Counters or some form of "money" for players
Preparation
Remove 4 x Aces and 1 Black "2" and 1 Red "2"
On these 6 cards take your marker and write in large lettering across them -DO NOTHING
On all the remaining RED cards in the pack, write GIVE in large lettering.
On all the remaining BLACK cards in the pack, write TAKE in large lettering.
Make up two packs by taking half of each of the cards above and put 3 x DO NOTHING cards into each pack.
Shuffle each pack.
Rules of Play
Make up two tables of four players per table.
Place the pack of cards you have prepared in the centre of each table, face down.
Give each player 7 counters.
The game starts with the first player shaking the dice.
That player then takes a card from the top of the pack and looks at it.
She then either GIVE's to the player or TAKE's from the player on her right the number of counters according to her dice throw.
If she draws a DO NOTHING card she does not GIVE or TAKE counters
The dice is passed to the player on her left (clockwise) after she has completed her turn and the next player shakes the dice etc
When a player has no more counters she is out and the game continues with the remaining players.
The player may not have enough counters left, to pay, when asked. If so, she just hands over what she has and is out of the game.
The Winner is the one who gains all the counters.
We reward the winners with a sticker (Super Star etc) and the player with the most stickers at the end of the session is the Champion Taker!!
(I have called the player "she" but this game appeals to the men-folk as well!)
Posted by Unknown at 10:08:00

I have put together two eBooks to help you with your groups... 41 Easy Quizzes and Answers and Simple Crafts and Activities ... r...