We made a Wall Mural - Olympics 2012 - at Mencap Braintree 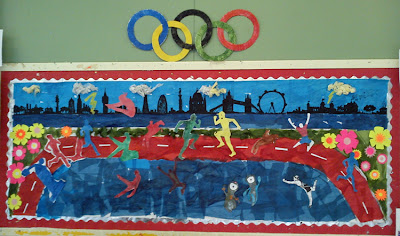 With Shaun at the helm, we made a wall mural to celebrate the fast approaching Olympic Games 2012.﻿

Shaun sketched the layout and then the Mencap Art group glued on layers of tissue paper, representing the sky, the Thames, the athletic track and the swimming pool.

Cut-outs of athletes and swimmers were then stuck on and some flowers placed, representing Summer!

Shaun then painted in the London skyline (with a little artistic licence in play, as regards the order of same!) in black acrylic paint.

Tissue clouds completed the picture - it does rain in London, in Summer!

I have put together two eBooks to help you with your groups... 41 Easy Quizzes and Answers and Simple Crafts and Activities ... r...